The path to the Alternative Investment Funds Managers’ Directive (hereinafter, the “Directive”) , aimed at regulating alternative investment fund managers’ activity in Europe started more than five (5) years ago. It began in 2007. Since its inception, it has
caused concern among the venture capital sector, which watched activities of a very
different nature, such as those carried out by hedge funds and private equity and venture capital enterprises, being all lumped together. The final date for the transposition of the Directive to national legislation approaches inexorably.
The 22nd of July of 2013 is getting closer by the minute and, with the exception of Luxembourg, and Ireland, the remaining countries are at various stages of this transposition. It is not surprising that, due to the accumulated delays in compliance with the obligations prior to transposition (the Commission should have concluded the adoption of delegated acts and decided on the Regulation in April of this year, but did not do so until the 19th December of 2012), some Member States have expressed
their unease over the difficulties they now face as a result of the accumulated delays.
The transposition of the Directive shall provide a European Passport with which alternative fund managers will be able to actively sell alternative funds in all member States. Despite the long road travelled, it does not all end on the 22nd of July 2013. As of this date, and for another six (6) years, a number of other milestones still remain to be met. Therefore, twelve (12) years after having been launched, the Directive will draw a first stage to a close. The impact of the Directive in Spain will undoubtedly be less than that in countries in which private equity/venture capital activity was either not regulated or was done so very laxly prior to the transposition. We are aware of the intention of the General Treasury Directorate (Dirección General del Tesoro), in “taking advantage of the situation”, to carry out a few other changes in the LECR (Spanish Venture Capital Law), in addition to those which are obligatory as a result of the
transposition of the Directive. On the other hand, ESMA has recently published
a “Consultation Paper” regarding the remuneration of AIFMs (Schedule II of the Directive), in accordance with the mandate contained in the Directive itself.
Although compliance with ESMA guidelines is not obligatory, in the face of an economic situation as the one we are currently experiencing, where the remuneration of senior positions has become a particularly sensitive issue for public opinion, especially if not matched with good management, all Member States are expected to endeavour to aithfully apply such guidelines. Lastly, we must point out that, given that venture
capital has hitherto played a minor role in SME funding, and bearing in mind the scarcity
of bank funding and interest rates that are much higher than those before the start of the credit crunch, the need to find other funding sources for these types of enterprises is clear. With the aim of revitalising the industry and providing investment in European businesses currently under way, a draft proposal was published in December 2011 to regulate the venture capital industry in Europe. On its part, the Parliament has voted a text on the 13th of September of 2012. The main problem nowadays is that relating to tax havens. 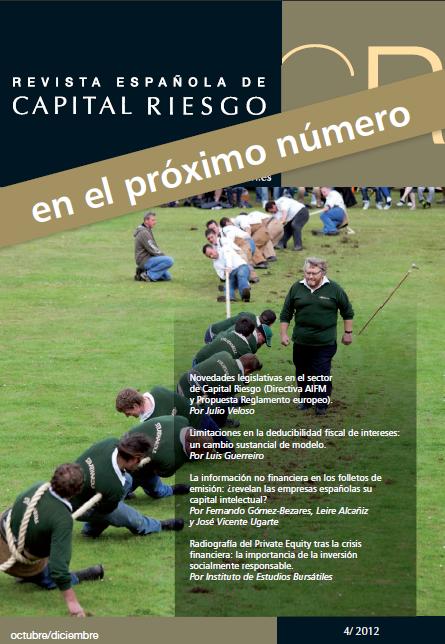